Review: Dreams in Fragments- Reflections of a Nightmare. 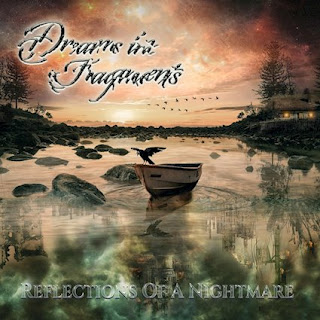 
The album opens with the wonderful "Everytime", which sets the tone for the album perfectly before delving into the beautiful soundings of "Nightchild". Other stand out tracks include "Incomplete" and the catchy "Defy Every Storm". Then there are "Falling with a Crown" and "Little Red" which are perhaps the heaviest songs on the album, growl wise. The album finished on a high with "Unirevers".

I absolutley loved this album. It was amazingly crafted and Seraina's vocals are beautiful and the added growls from Chris, it sets them apart from the rest of the crowd. Besides, beautiful lyrics and vocals the album is also full of increduble riffs. This is a must for fans of operatic female vocals or basically anyone who is a metal fan. 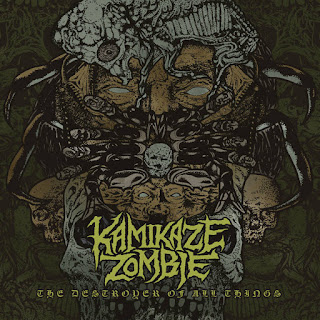 Review: Kamikaze Zombie- The Destroyer of All Things

Kamikaze Zombie started in 2014. They are a heavy crossover band from Birmingham AL. They are made up of drummer, Terry Quillen, guitarist, Steve Cater, vocalist and guitarist, Clint Spain and bassist Zac Cagle. They have multiple influences from hard rock, metal and punk. All of these very different influences led them to become their own genre of heavy music with multiple styles flowing through every KZ song. Kamikaze Zombie pushes to bring "old school" back to the masses with horror movie, serial killer themed stage shows and lyrics, black metal melodies, doom/sludge/death metal breakdowns, and in your face punk /thrash aggression.  The album opens with "It Watches" before delving into the chaotic soundings of "Prometheus". Other stand out tracks include; "The Dark Eyes of London", which is a short and dark track. Then there is the killer opening riff to the fantastic "Devil's Night". "Bite of the World" i 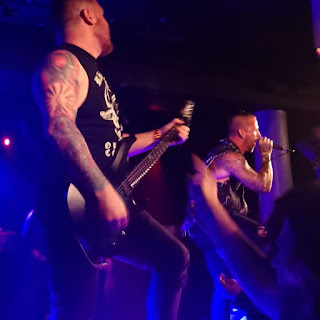 Orange County metalcore band Bleeding Through are back for a one off date at the happily named Underworld in Camden.The place is packed full of eagerly awaiting fans. As the room went dark and the band began to take the stage, the crowd's energy began to rise until breaking point, when the band broke into "Darkness, A feeling I know" and quickly storming their way into "Fade into the Ash". The band have a fantastic stage present and main singer Brandan is an absolute hit with the crowd, even keeping them entertained when keyboardist Marta, had to have help with putting her stand back up after a stagediver fell into it. They also played fan favourite "Kill to Believe" which sent the crowd crazy. Bleeding Through are an absolutley incredible live band, the DIY atmosphere is something that is generally missed these days, everyone is always trying to out do each other but not these guys, they are 100% real and the passion they have for what they d